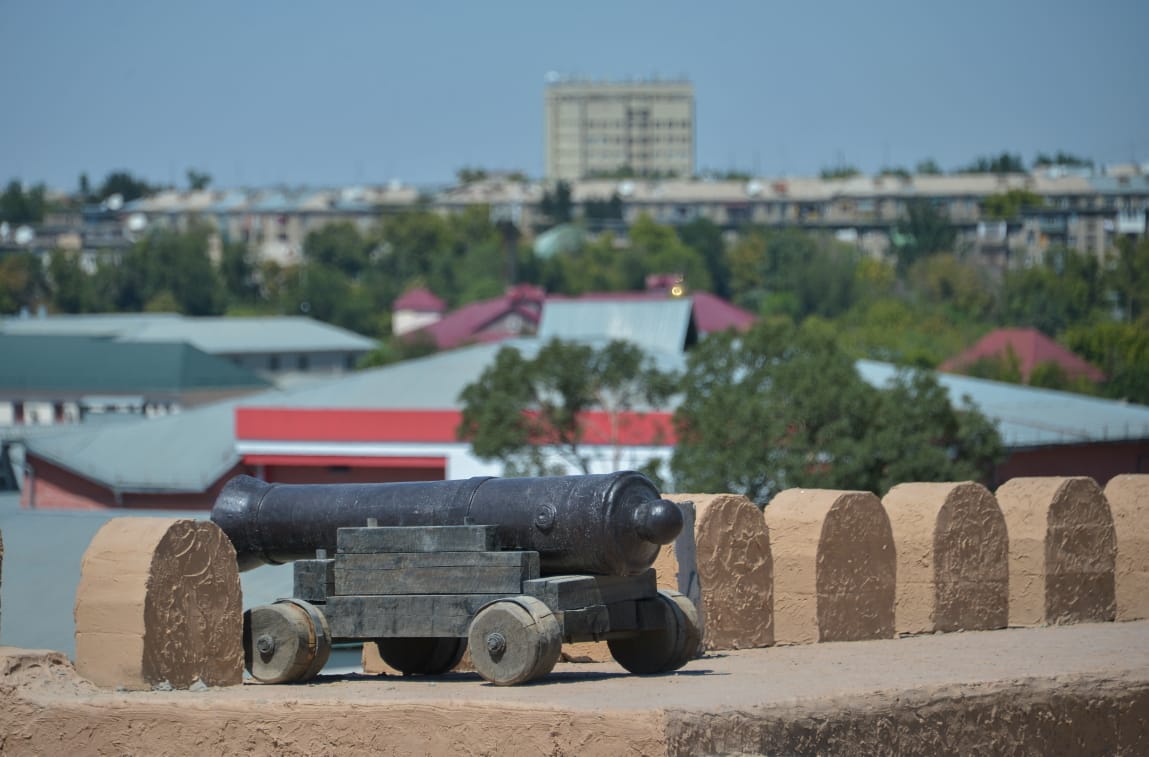 Shymkent’s old citadel – one of the oldest buildings in Shymkent is coming alive again. We had a look on this incredible landmark in autumn.

It’s time to have a look on the amazing places in Shymkent. Let’s start a virtual sightseeing tour through Kazakhstan’s 3rd largest city Shymkent. Our first stop in this article series Touring Shymkent will be Shymkent’s old citadel – often also referred as Shymkent fortress.

We can find the old citadel of Shymkent very easy: It’s located near Ordabasy Square (Ордабасы алаңы) and Independence Park (Тәуелсіздік саябағы) in the old heart of Shymkent. If we walking from Shymkent train station down the Qabanbay Batyr Avenue and passing by the Independence Park to the left we will see the entrance and gate to the Citadel to the right.

The fortress lost its importance during the Russian Empire because a new city center for Shymkent was built some kilometers away. Over the next decades the fortress disappeared under rubble, mud and scrub.

Many times people wanted to construct houses on the site of the former citadel but scientists and archaeologists protected Shymkent’s old heritage.

In 2007 excavation work started to lift more secrets of the past of Shymkent and finally – in 2018 – they started to reconstruct the old walls of the citadel. The first phase was opened this year – in 2020. The next phase will open in late 2021.

Now we want to climb up the fortification walls and we can watch 25 meters down to the river Koshkar ata.

Now we can recognize why the hill of the citadel was a good choice for the settlers to build a settlement and fortress: Because it is close to the river Koshkar Ata with fresh water from Sairam-Ugam mountains, fertile land next to the river for fields and its also the highest elevation in this area to watch and protect against enemies. Artifacts from the Bronze Age found near the citadel showing first activities in this region. But the first permanent settlers arrived at this hill 2,200 years ago in the 2nd century BC. This fact was also proven by archaeologist who found pieces of ceramic handcrafts deep in the ground of the citadel’s hill.

The importance of this place went bigger with the rise of the old town Sairam. The hill became a important outpost to improve the protection of the old silk road city from enemies from the steppe. So they started to build stronger fortification and watch towers on this site. Archaeologists found bricks of the oldest fortress tower from around 8 till 10th century. But the citadel was mentioned for the first time in 1366 during Timurid Empire.

If we looking over the court yard of the citadel and seeing this ongoing reconstruction and excavation work, we already recognize that Shymkent got its old heart back. Its great to see that this import historical place of Shymkent is coming alive again. And the city of Shymkent still have a higher goal – they want to reconstruct and preserve the excavation of the citadel as best as they can and to get an entry on the UNESCO world heritage list. This would be a great achievement for Shymkent and we wish them good luck and success.