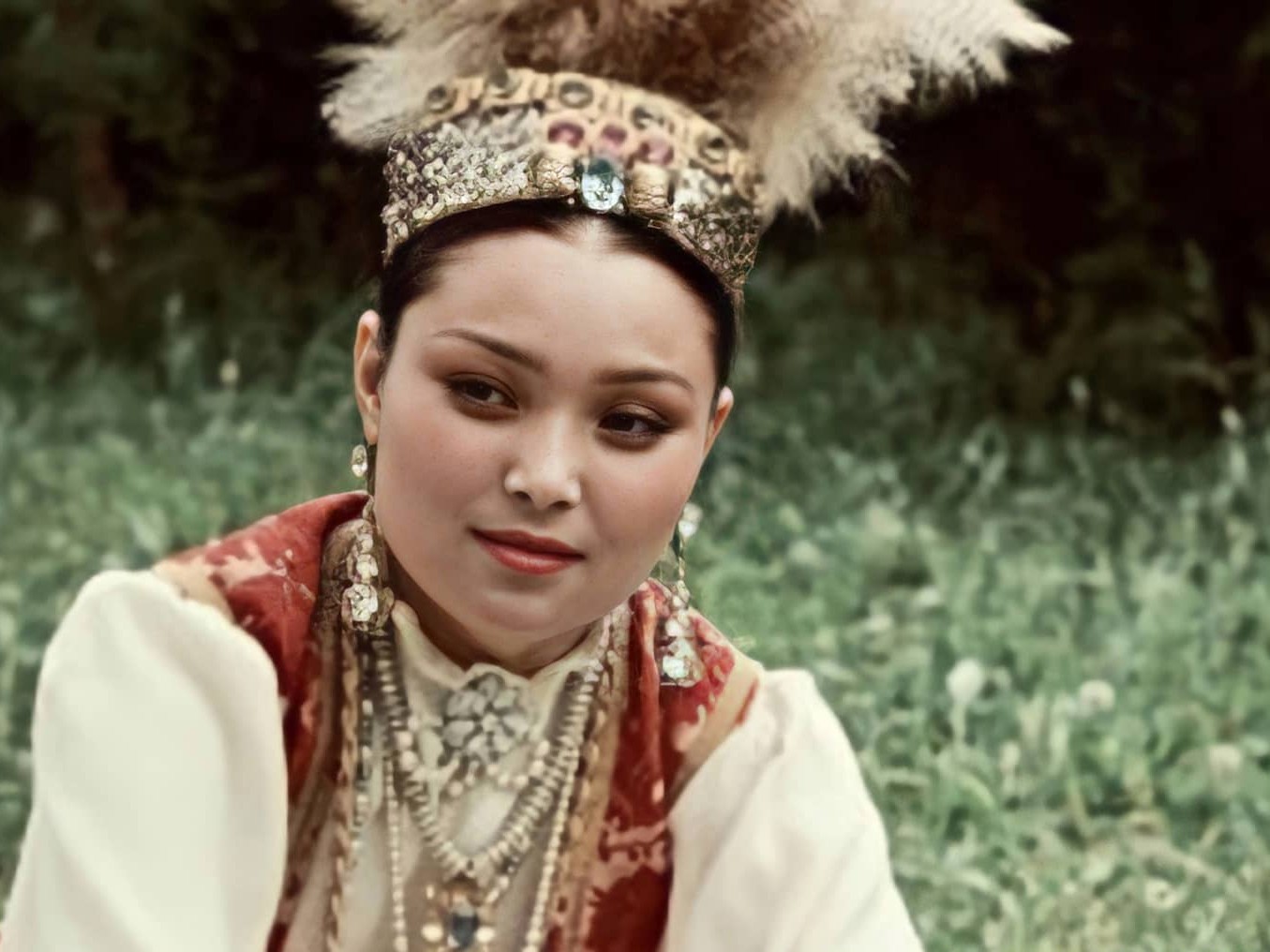 On this day, the famous Kazakh singer Roza Baglanova would have been 100 years old. Time to take a look at her eventful life.

100 years ago a little girl was born in Kyzylorda region in the small town Kazalinsk (today Kazaly between Aralsk and Cosmodrome Baikonur) on the left shore of the mighty river Syr Darya. Her name was Roza Baglanova. The mother was Akkurush and the father Tazhibay Baglanov. They Kazakh couple had already an older son with the name Idris and lived together with grandmother Kundey and Tazhibai’s second Tatar wife Maryam.

Little Roza already dreamed in her earliest years to become a singer. Her grandmother Kundey listened to her dream, and taught the skilled child to sing. As young girl her parents send her to the art club of Kazalinsk and she became part of the local theatre.

The members of the art club encouraged her to participate in local and country-wide competitions to improve her skills in singing. She went to concerts in the regions capital Kyzylorda as well into the huge cities Almaty and Orenburg. Roza had a sonorous childish voice and conquered the hearts of the listened people very fast. She received many prizes in competitions and became popular.

But the childhood ended fast, and a hard time started after her father Tazhibay Baglanov passed away during his military service. The family lost suddenly its only breadwinner. Roza’s grandmother Kundey started to sell her belongings and exchanged silver jewelry, dishes, trays, spoons, belts, and bracelets to buy bread, tea and flour.

The three elder women of the family also started to sew clothes and sold them to earn money and to feed themselves and the children. But in 1932 the huge famine arrived the Kazakh steppe and worsened the situation. When the Kazakh winter started with its frosts and icy winds, young Roza had no warm clothes. But she didn’t gave up. Muffled into blankets from the feet to the head, wearing a woolen scarf on the head, homemade boots from the large felt mat on the feet she went every day – also during blizzards – the six kilometres to school and back.

The cold winter and the famine went away and in 1939 Roza Baglanova got the opportunity to study at the Kyzylorda Pedagogical Institute. She dropped studying in the university in the third year in 1941 because the financial situation of the family worsened again. The government stopped to pay the pension for the dead father.

Roza decided to go to Tashkent to the relatives where she would live better to work and feed the family. The Textile institute suggested a good variant for combining studying with work, providing free food, and living in a dormitory.However, the destiny prepared for Baglanova something more significant than just being an ordinary weaver.

One morning, absolutely in a random way there was a meeting with the soloist of the Tashkent Opera House and the director of the Uzbek philharmonic Mukhitdin Kari-Yakubov. He was passing the house where Roza lived when she stood at the gates and sang. Kari-Yakubov stopped there and listened to the singing of a young woman. He liked it. After Roza finished her song, the director approached her, expressed the feeling of adornment to her voice, and suggested going to the audition in philharmonic.

On the following day, the young artist sang on the stage of the Uzbek philharmonic not only to the Kari-Yakubov but to the other members of the jury. All of them liked the beautiful voice of Roza and accepted her to the Song and Dance Ensemble of the Uzbek Philharmonic. From 1941 to 1947, she was a soloist. In that period the leader of the Woman ensemble was Tamara Khanum.

In Tashkent on one of her first big concerts, which was dedicated to the cotton growers, Roza was noticed by the First Secretary of the Central Committee of the Communist Party of Uzbekistan Usman Yusupov. He was amazed by her talent too. Yusupov provided Baglanova with a five-room apartment in the centre of the city with all the other conditions for a comfortable living and brought her left relatives to Tashkent. In the summer of 1941, on the coast of the reservoir in the village Kattakurgan there was the second concert of Roza within the ensemble. Usman Yusupov attended it, and all the first department sang only Roza. After the concert, he came to the singer and gave her 1000 roubles with a ticket to studying in the Moscow Conservatory.

With the start of Roza Baglanova’s career, the World War II began. The ensemble went to the war front to lift the spirit of the fighting soldiers of the Soviet army. Spending 4 years at the war Baglanova with the artists gave about thousands of concerts performing on the front line with the soldiers of the Red Army. She had to pass 15 kilometres a day in full uniforms, with the weapon on the shoulder and holding the costumes for the performance. Having thirty-third size of foot she had to wear thirty-ninth size of the military boots, the smallest size, filling them with foot cloths and rags. The clothes were so large for her that she sewed them twice.

Roza sang everywhere, but mostly in the places where everyone could see her. The stage could be the truck body, the tracks of the tank, the wagon. Sometimes even the place of performance could be 600 meters from the front line. The young star sang about 15 hours a day without a break despite the bad weather, blood, and flying bullets.

Her collection of songs was fulfilled with many military and folk compositions. The most popular song was “Ah, Samara-gorodok” from the repertoire of Lidia Ruslanova. Later Ruslanova liked how Baglanova performed the song and gave it to her, because “Ah, Samara-gorodok” was already the “name card” of the Kazakh artist. Baglanova sang in 20 various languages. It included all the languages that were spoken by soldiers from all the Soviet countries. She wanted to remind them by singing in their native languages about the homeland and bring some light memories despite the horrors of on-going war.

In 1943, Roza got injured in the eyes when there was mortaring. Six operations were made to save her health. And even after getting the wound she came back to the battlefield and helped medical staff to carry and bandage the soldiers.

Roza Baglanova was the only Soviet artist who was awarded twice with the medal “For Military Merit” in the period of the WWII. Marshal Ivan Konev awarded her with the first medal on 1 May 1943. On 22 February 1945, there was the release of Warsaw from the fascists. The ensemble of Tamara Khanum with Roza Baglanova and other members went to the city to perform to the seriously wounded soldiers who laid on the ground in the half-ruined buildings. After the victory in releasing the city, on the same day in 18:00, Konstantin Rokossovsky awarded Roza with the second medal “For Military Merit” in his residence.

On 2 May 1945, the singer came back to Moscow not reaching Berlin 90 kilometres from it. In the capital, she met the victory of the USSR and gave the concerts with her ensemble.

Coming to Almaty, beginning in 1949, she became a singer with the Kazakh State Academic Theatre of Opera and Ballet named after Abay, then the Jambyl Kazakh State Philharmonic (1960) and was a leading master of the Kazakh state concert association “Kazakhconcert”.

During her career, she performed in Poland, the German Democratic Republic, Belgium, Hungary, Austria, Czechoslovakia, the People’s Republic of China, the Republic of Korea, India, Burma, Canada, and other countries. One of her passions was singing in the language of the country she was performing in, and so performed traditional folk songs in Russian, Kazakh, Uzbek, Tatar, Mongolian, Korean, and others. Among them: “Ah, Samara-gorodok”, “Dark Is the Night”, “Vasya-Vasilek”, “Ogonyok”, Korean folk song “Doradi”, Finnish folk song “Tuku-tuku”, Indian folk song “You stole my heart”, Kyrgyz folk song “Perizat-ou”, Uzbek folk song “Tam basynda turgan kyz” and more others.

In 1949, the head of the USSR Stalin turned seventy years old, she took part in a big concert in the Kremlin dedicated to his anniversary. She sang two songs. Stalin got up from his place and his guests of honor followed after him: Mao Zedong, Jacques Duclos, Wilhelm Pieck, Klement Gottwald, and others.

In 1955, during a tour in India, she was awarded the high title “People’s Artist of the Kazakh SSR”. In 1967 when she gave concerts in Semipalatinsk, she was awarded the highest title at that time “People’s Artist of the USSR”. She traveled all over the Soviet Union. She was with the builders of the Baikal–Amur Mainline, in the Kuril Islands with fishermen, on the island of Sakhalin.

She had been in every corner of Kazakhstan: at the Baikonur cosmodrome (on April 12, 1961, She was giving concerts in the city of Kostroma. On this day, she shortened the concert by 40 minutes and dedicated it to the one who took off from Baikonur, the first cosmonaut of the Earth), with the fishermen of the Aral Sea, with livestock breeders in the most distant districts, on many stages of the Houses of Culture. Also, she sang in auls (Kazakh villages), villages of the republic, sometimes right under the open sky, and on moonlit nights and hot days.

On December 13 1979, during one of the concerts in the city of Pavlodar her eyes darkened and she stopped seeing. The injuries of the past made themselves felt. But the singer did not stop the concert and continued performing. Although she has been treated until April 1980, her vision was not restored. On April 5, 1980, at the Palace of the Republic, the big festive concert took place, and she performed sing at the stage with the help of son. Because her eyes could not see anymore. She began the concert with her favourite song “Dark Is the Night”. While performing it, she tried to convey to the audience the inner anguish and bitterness of war. That concert breathed new life into her. After that, she immediately flew to Moscow for an operation. She underwent three operations at once. The surgeons told her they needed another operation and explained the reason for that. It turned out that one of the fragments from the mine was still in her head. The operation was completed successfully.

In November 2005, her eye disease worsened again. She was in the hospital. The singer underwent one more operation. According to her words, she got well by praying to Allah before the operation.

Roza Baglanova got a heart attack on 8th February 2011 and died at age of 89 in Almaty.