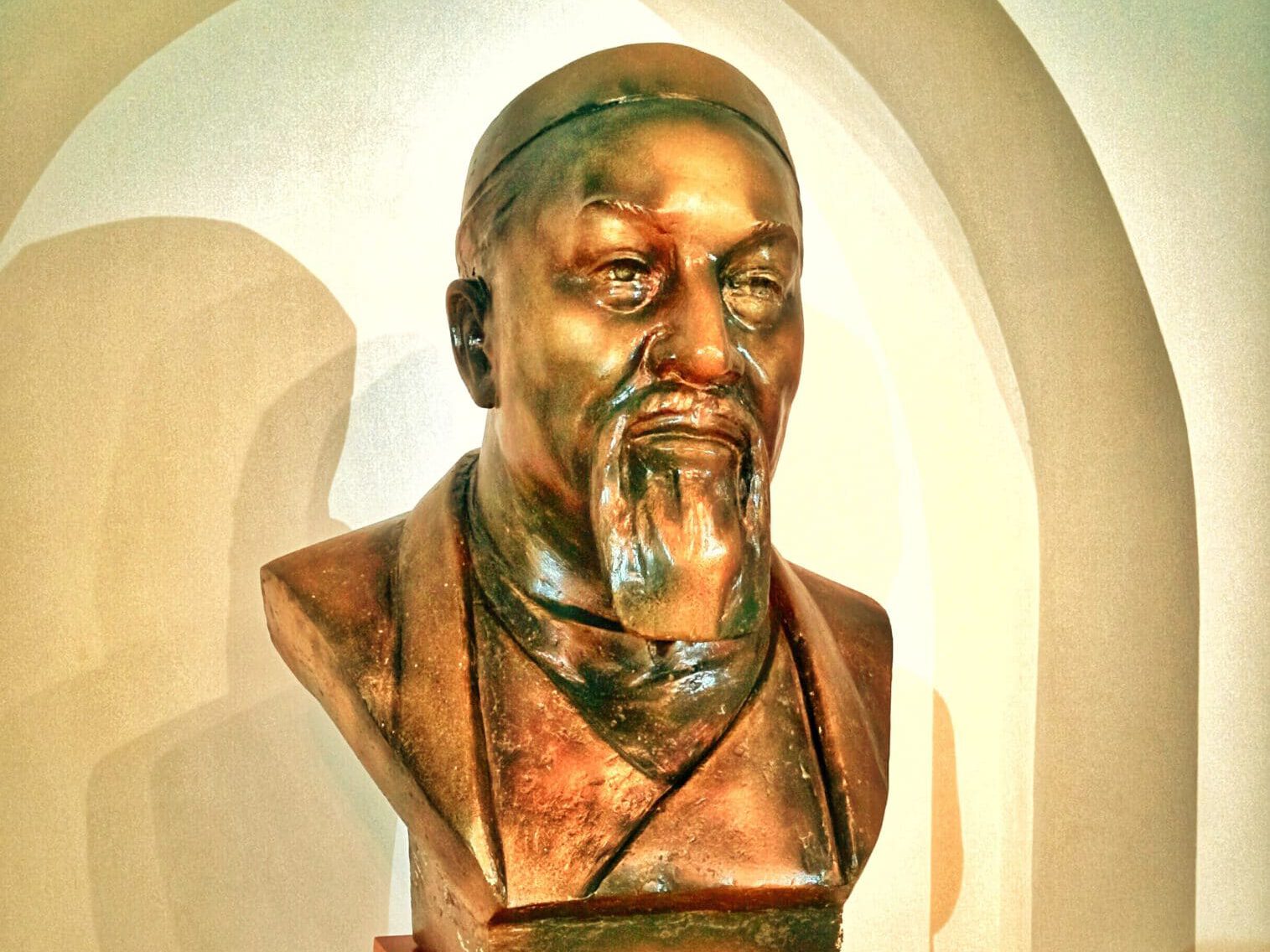 Abai Qunanbaiuly is a Kazakh poet and philosopher. Here you can read about his biography and works.

Abai Qunanbaiuly – Kazakh poet, composer and philosopher. He was born in Semei/Semey Oblast (Semipalatinsk Oblast), at the mountain Shingiztau, East Kazakhstan on the 10th of August in 1845.

His real name is Ibrahim, the name “Abai” was given by his grandmother Zere (but in some infos written that it was given by his mother Uljan/Ulzhan). “Abai” means “carefull”, “cautions” and “attentive”. As child, Abai grew up as a clever and smart boy. He interested into the history and literature of the Kazakh people and foreign countries. He knew all legends and fairy tales from his grandmother Zere. We can say that he was a reformer who sought to modernize Kazakh culture by bringing his liberal views of Islam to European and Russian culture and a founder who build the fundament of the recording Kazakh literature and the Kazakh literary language.

Abai was a composer who gave a new wave to Kazakh music. For example, his songs “Zhelsiz Tunde Zharyq Ai” (direct English translation: A Moon on the Waveless Night”) and “Kozimnyn Qarasy” (directly translated into English: You are the Pupil of My Eyes) are so melodic and romantic.

Abai Qunanbaiuly also to Islam expressed his philosophical views on religious beliefs in his poems. We can see his philosophical views in his book “Abaidyn Qara Sozderi”/”Book of Words” (in some infos it’s called Abaidyn 45 Qara Sozderi” (direct English translation: Abai’s 45 words/thoughts). In this book Abai wrote about his view about life, knowledge, culture and religion.

He wrote his poems by inspiration, even he gave his poems to his students and he allowed to his friends/students to use his poems as their. And 1904 after Abai’s death they tried to collect his works and published in 1909 in Saint Petersburg. In this book was around 140 poems of Abai.

As child he learnt Arabic, Persian, Chagatai and other oriental languages. And of course he learnt Russian language. As child he started to read the works of the Oriental Classics like: Ferdowsi, Khozha Khafiz, Nizami Gandjavi, Ali-Shir Nava’i, Fuzuli, Sagdi and then he started to read the works of the Russian Classics like: A.S.Pushkin, N.A.Nekrasov, A.I.Gerzen, I.A.Krilov, L.N.Tolstoy, F.M. Dostoevskyi, I.S.Turgenev, N.G.Cherneshevskyi. What about European Classics he read the works of Goethe, Byron and many others. He also interested to the works of the famous scientists like Benedictus de Spinoza/Baruch de Spinoza, Herbert Spencer, Charles Robert Darwin, John William Draper, Lewis, Ibn Sina/Aviscenna and many others.

Abai Qunanbaiuly tried to protect the women rights. According to Soviet literary critics, he didn’t like some of the customs of the tribal of village/Aul. And spoke out against the “slave position of women” and as repeated in his ceremonial Soviet biographies, “against social evil and ignorance”. And you can see it from his poems and words too.

The head of the “Alash Party” Alikhan Bokeikhanov was the first biographer of Abai Qunanbaiuly. And other members of the “Alash Party” Ahmet Baitursynuly and Mirzhakup Dulatuly wrote many articles about Abai Qunanbaiuly. Ahmet Baitursynuly wrote article about Abai ,”Kazakh’s main Poet”, in the newspaper “Qazaq” in 1913. Kazakh author and writer Mukhtar Auezov wrote four volume novel “Abai Zholy”/ “Abai” (direct English translation: Way of Abai/ Abai’s Way) and he wrote a libretto of the opera “Abai” in 1945, then he wrote a script for the feature film “Songs of Abai”.

Abay had many foreign friends. He communicated with Evgeny Petrovich Michaelis (we can tell that he was one of the best friends of Abai), Nifont Ivanovich Dolgopolov, Pavel Dmitrievich Lobanovsky, Severin Severenovich Gross, A.A.Leontev and with many other people.

Abai was a man of varied attainments. Maybe because of his versatility, thirst to discover something new for himself, love for knowledge made him favorite of the Kazakh people. Yes, there were many people who were jealous to Abai, that he is trying his best to improve Kazakh culture, literature, knowledge, and of course to make the Kazakh life better. If you read Abai’s biography you will be surprised what he has done and what he lost on the way of the modernization of Kazakhs life, knowledge.