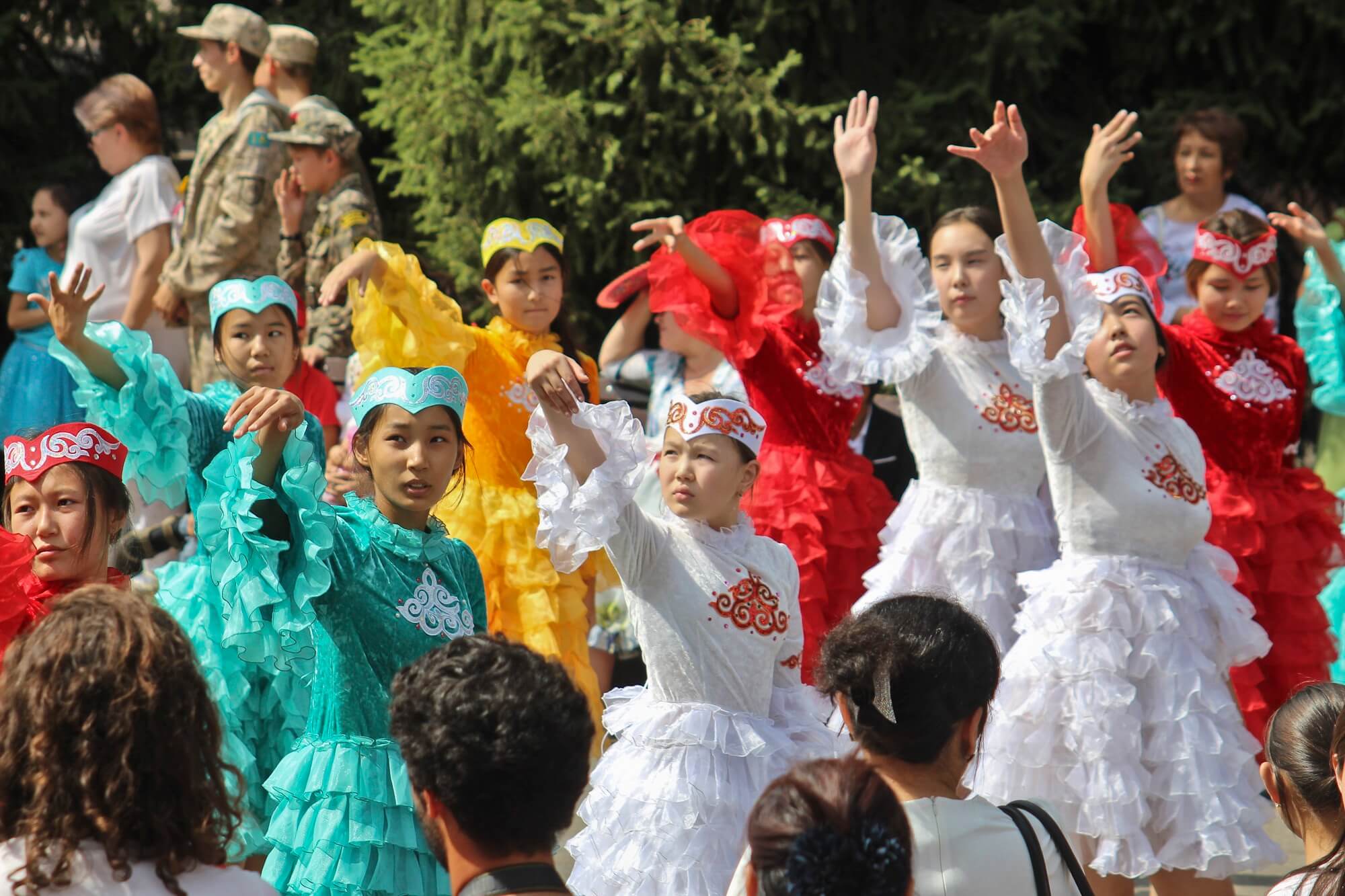 Today is the International Dance Day. It’s a good moment to have a look on the beautiful Kazakh folk dances and their history.

The Kazakh culture is very fascinating: Delicious foods, beautiful traditional clothes, Folk songs and interesting National Kazakh Folk Dances! We want to provide you with some interesting facts about the Kazakh folk dances.

The Kazakh folk dance Kamazhai or Qamazhai was developed in 14th – 15th centuries. Actually Kamazhai is a folk song. The text is about the girl who was called Kamazhai, and author is telling about his feelings about Kamazhai. But in the text of the song it’s already clear that the man and the girl couldn’t be together. Because it’s a tragedian sad song. The meaning of the song seems to this:

“On the head of Kamazhai one small owl feather, I parted (lost her) and I was ashamed. How can I be happy (having fun), if I lost (parted from) Kamazhai?! On her hand a golden ring, is she sitting and looking somewhere?! She always couldn’t wait even for an half hour (to meet with him). Did she really lose her hope?! (To meet with him) … “

So, we can say that the dance Kamazhai describes well the song. The song and the dance is like a chain – deep connected with each other. The movement of dance is describing the girl and the emotion of the man.

The dancers are mostly women. So, the gentle movement of the hand close to face and neck shows how beautiful is the girl. And hands are going up and making a huge wave movement is like a fire – what shows about the feeling. And one hand goes up and the fingers making small waves, and the second hand slowly goes down by making the same waves with the fingers – it’s like a pure love. Actually the dancer could be one person or more than nine dancers. The author of the song is unknown. But now you can hear the different version of the music, sometimes to much remix and modern instruments are included. Sometimes the “edited” versions don’t sound beautiful. The original version with Kazakh national music instruments sounds more calm and beautiful.

Actually Aigolek was originally and still is a national game. The group of people are divided into two teams. And one person will hide the stone in his/her right or left hand, and the leaders of the groups have to guess, which hand has the stone. The group who has guessed correctly will start the game. By the way, the amount of members of the group can be 10/10 or 5/5, depends how many people want to play. So, the teams stand opposite each other, the members of the team have to hold each other’s hand. And the team who guessed correctly is starting the game by singing the song Aigolek. The meaning of the song: “Aigolek, Aigolek, which person from our team do you need? (Singing to the opposite team). And that team will answer back by singing: “Aigolek, Aigolek from your team we need (telling the name of the person) that person!”. So, the person who’s name was mentioned has to run to the opposite group and has to break the “chain” of the group. If the participant could break the “chain” will take one of the member of that group and going back to his/her team with a new member. If the person couldn’t break the “chain” has to stay in that group, so the group also will have a new member. Sounds interesting, doesn’t it? Now mostly children are playing this game in Kazakhstan.

But in our days Aigolek became also a famous child dance. You can listen to the music by repertoire of the famous Kazakh singer Roza Rymbayeva.

Kara Zhorga or Qara Zhorga – is one of the oldest folk dance of the Kazakh people. The meaning of the word Kara Zhorga is Black Horse. Why it’s called A Black Horse?

Actually the dance Kara Zhorga describes the life of Kazakh people. Endless Steppe, a person who is riding a horse and controlling the ship herd, and the horses are running down from the hill, and a busy and noisy Aul (Kazakh village), children are playing a game. Kara Zhorga – a celebration dance, also the text of the song Kara Zhorga proves that.

The process of the dance: One of the men goes into the center and shows the difficult dance movements, actually the main dancing part of the body is shoulders, hand and arm, crossed legs. Man starts dancing and takes one of the horses and sitting on it, and man is dancing with difficult tricks by riding the horse. And other people follow him, but not riding a horse, just starting dancing. Boy and girl standing opposite each other and dancing by moving the shoulders, arms. The legs of the person have to be crossed and the hands have to stand on the hips and moving the shoulders and arms to front and back or left and right like strong shaking.

Some information are telling that the person who revived the dance is Arystan Shadetuly. But the famous Kazakh dancer and choreographer Shara Zhienkulova (1912-1991) demonstrated also this popular Kazakh folk dance.

Actually, Kara Zhorga – is not only Kazakh National Dance. From the Mongolian Dance you can recognize the movement of Kara Zhorga, too. That proves that Kara Zhorga is one of the oldest dance in Central Asia.

The meaning of the song shortly: Dance, enjoy the celebration, smile!

We hope you learn a little bit more about Kazakh folk dances and wish you a happy International Dance Day!