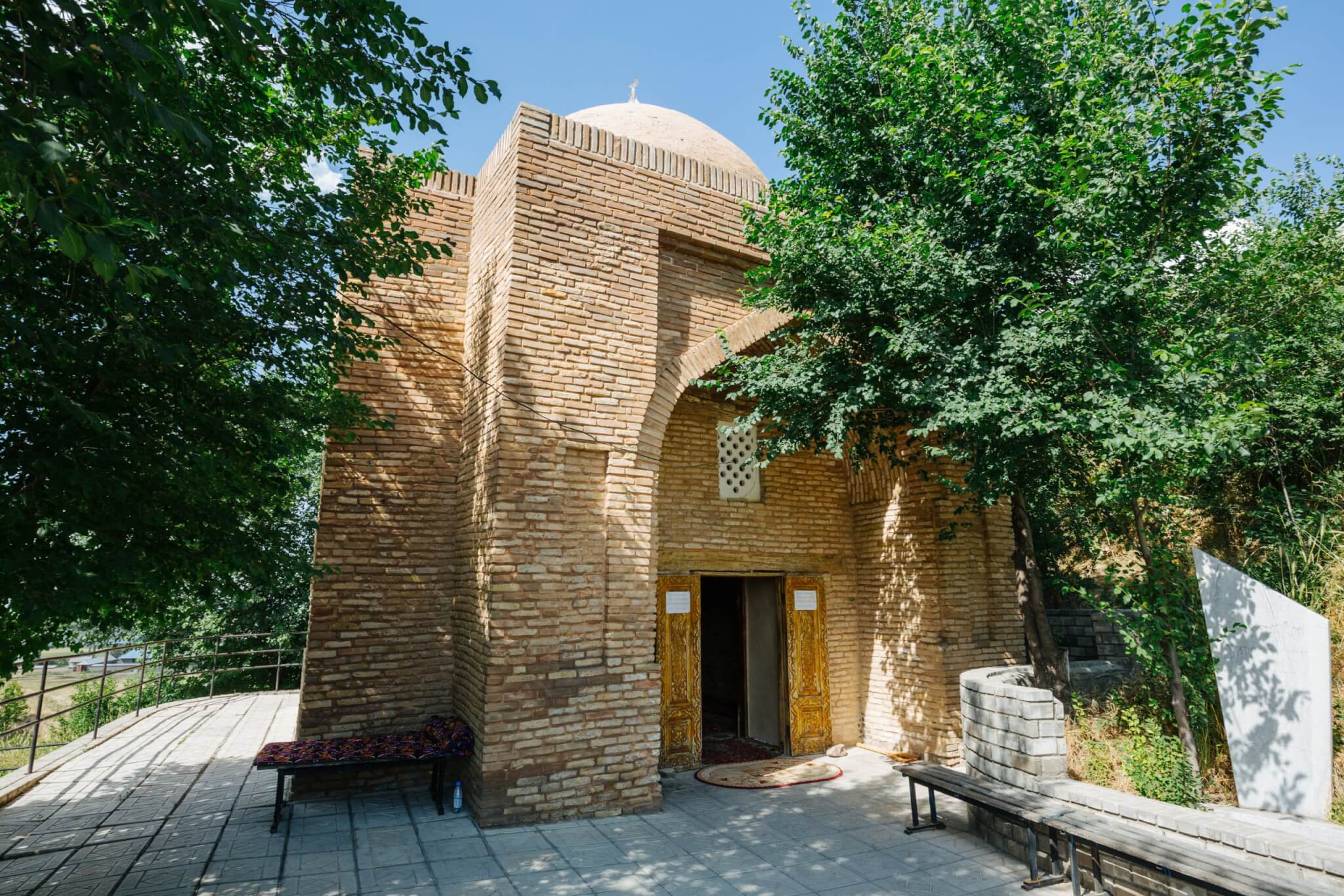 3000 years old Sayram is one of the oldest city of Kazakhstan and has a high dense of beautiful mausoleums. Join us on a city tour.

We start our tour near the Bus & Marshrutka Terminal near the Qyrgy Bazar of Shymkent. We taking a marshrutka to Sayram – a suburb of Shymkent. But Sayram wasn’t just a suburb in its history. Sayram – in the history books better known as Isbijab – is a city full of history and is one of the oldest city of Kazakhstan and even one of the oldest continuously inhabited city in the world.

Sayram was founded 1000 BC and has seen multiple kingdoms rise and fall and was destroyed by wars and rebuilt multiple times. Its most notable citizen of Sayram is the famous Sufi Khoja Ahmed Yasawi and the mausoleums of his parents Ibrahim Ata and Aisha Bibi are located in the city.

After a 30 minutes ride with the marshrutka we arrive the northern city gate of Sayram. Two big arches showing the place of the former northern gate of the old city center – the old madina.

Our first stop is the Mausoleum of Abdel-Aziz Bab also known as the Balegerdan Mausoleum. It is located just 300 meters north of the city gate at the left side of the same street – the Y. Saremiy street. The mausoleum is located in the center of a old Islamic cemetery and with its three domes it is easy recognizable.

Abdel-Aziz Bab (Arabic: Servant of the Almighty) was a Arab warrior during the Arab Conquest of Central Asia and lived in the 8th century. He was standard-bearer of Muslim troops led by Arab Iskak Baba and they entered the territory of modern Kazakhstan in 766. The legend tells that he showed true heroism in the spread of Islam and his education, steadfastness and unswerving loyalty to Islam was notable. Abdel-Aziz Bab‘s nickname was Balegerdan, that means “expelling trouble“. This is referring to his knowledge to protect people from evil and bad luck. Considering the fact that until the middle of the 9th century construction of any grave buildings was banned in Islam, it is assumed that the original mausoleum over the grave of Abdel-Aziz Bab could appear in the Karakhanid era, within the 10th-12th centuries. The modern building of mausoleum dates back to the middle of the 19th century. It is a type of traditional portal-domed building that developed in sacred medieval architecture on the territory of South Kazakhstan.

The second stop is the mausoleum of Karashash-ana. It just a five minute walk down the Y. Saremiy street to the city center and then to the right into the Amir Timur street. The mausoleum is directly at the street on the right side. The mother of the holy Sufi Khoja Ahmed Yassavi and wife of Ibrahim Ata is buried in this mausoleum. Her name was Aisha Bibi (don’t mix it up with Aisha Bibi near Taraz). She was the daughter of Sheikh Musa, a famous, noble and wealthy resident in Sayram. It is reported that Aisha Bibi was not arrogant and she became famous for her modesty. She had the skill of healing and to interpret and explaining the dreams of people. Khoja Ahmed Yasawi mother devoted a lot of time to raising not only her children, she helped everyone who needed help, especially the suffering and sick people.

The first mausoleum was built over her grave between the 12th-14th centuries. The current building was built in the 19th century on the site of a destroyed medieval building. But why is it called Karashash-ana Mausoleum? Karashash-ana is Kazakh and means “black haired”. The name of the mausoleum has its origin in a legend that a lock of black hair was once tied on the top of the mausoleum.

The only survived minaret in Sayram is named after the Prophet Kydyr, who is mentioned in the Qur’an as an unnamed companion of Prophet Moses. The burned brick Kydyr minaret dates back to the 9-12th centuries and was according of historical sources around 10.5 meters high but was ruined over the centuries by wind, water and wars. The minaret was part of the Kydyr Paygambar Mosque which was a small but important historical and cultural complex. The mosque also disappeared as a result of the influence of nature and time – and only an underground room and the half ruined minaret remained till the 1920ies. During Soviet Union times also the underground room disappeared. But after Kazakhstan became independent the foundations of the Kydyr Paygambar Mosque has been archaeologically excavated. The large rectangular courtyard with the entrance from the east is still visible. The Kydyr minarat itself was reconstructed but only to a height of around five meters. The base of the tower has a diameter of around 2.5 meters. The top of the minaret is paved with patterned brickwork and has open windows at the top. The narrow staircase to the top of the minaret is reinforced with wood and burned bricks. Please take care about your head when you want to climb up the minaret.

Another beautiful mausoleum is located at the Amir Timur street around 300 meters to the east from the former wall of the old madina. Visitors find at the entrance written: “I am a traveling force. And only here I receive people who are looking for me!− Kydyr Ata.” Khojasalyk is the father of the famous Kydyr Ata. This monument is one of the most detailed and beautiful buildings in Sayram and is framed by a small rose garden. It was built in the 18th century with burnt bricks and the mausoleum’s exterior walls are covered in glazed tiles constituting geometric patterns. The building has a outline of 6.44×6.30m and a height of 7.15m. During the times the building has been repaired three times. The last renovation occurred in 2010 financed by ex-Senate deputy Omirbek Baigel’di. But just seven years later, the dome of the mausoleum was damaged by have snow snow and rain. A temporary roof is protecting the Khojasalyk Mausoleum from rain and ice since 2017 now.

Our last stop is the mausoleum of Ibrahim Ata. We just following the Amir Timur street to the outskirts of Sayram in the direction to Aksu village. As one of the last buildings of Sayram – on a high hill to the right of the street – we found the mausoleum. This building built with burned brick stones is the tomb of Sheikh Ibrahim, the father of the Holy Sufi Khoja Ahmed Yasawi. Ata means in Kazakh Father. It is listed as national architectural monuments in Kazakhstan. The ancient Sayram, which in the Middle Ages became one of the centers of of distribution the Islam in Central Asia and was home of spiritual mentors and scholars. One of them is Ibrahim Ata, who taught thousands of students in Islam. There are legends about him that he had a huge talent of prophesy. So very early a mausoleum was build on his tomb. But in the middle of the 19th century a earthquake destroyed the dome of the mausoleum. The collapsed roof was restored in a simplified configuration in the early 20th century. After Kazakhstan became independent the government of the new country send money for the restoration of the Ibrahim Ata Mausoleum. The money was used to move the Amir Timur street 20 meters side-wards and the basement of the mausoleum was reinforced and a terrace was built around it. This monument of medieval architecture is one of the earliest preserved domed mausoleums in the region.

This was the end of our tour to visit the most famous mausoleums of Sayram. We hope you liked our report and inspired to do this walk through Sayram, too. After the visit of the Ibrahim Ata Mausoleum we walked back to the city center and ate wonderful Shashliks before we went back by marshrutka to Shymkent.