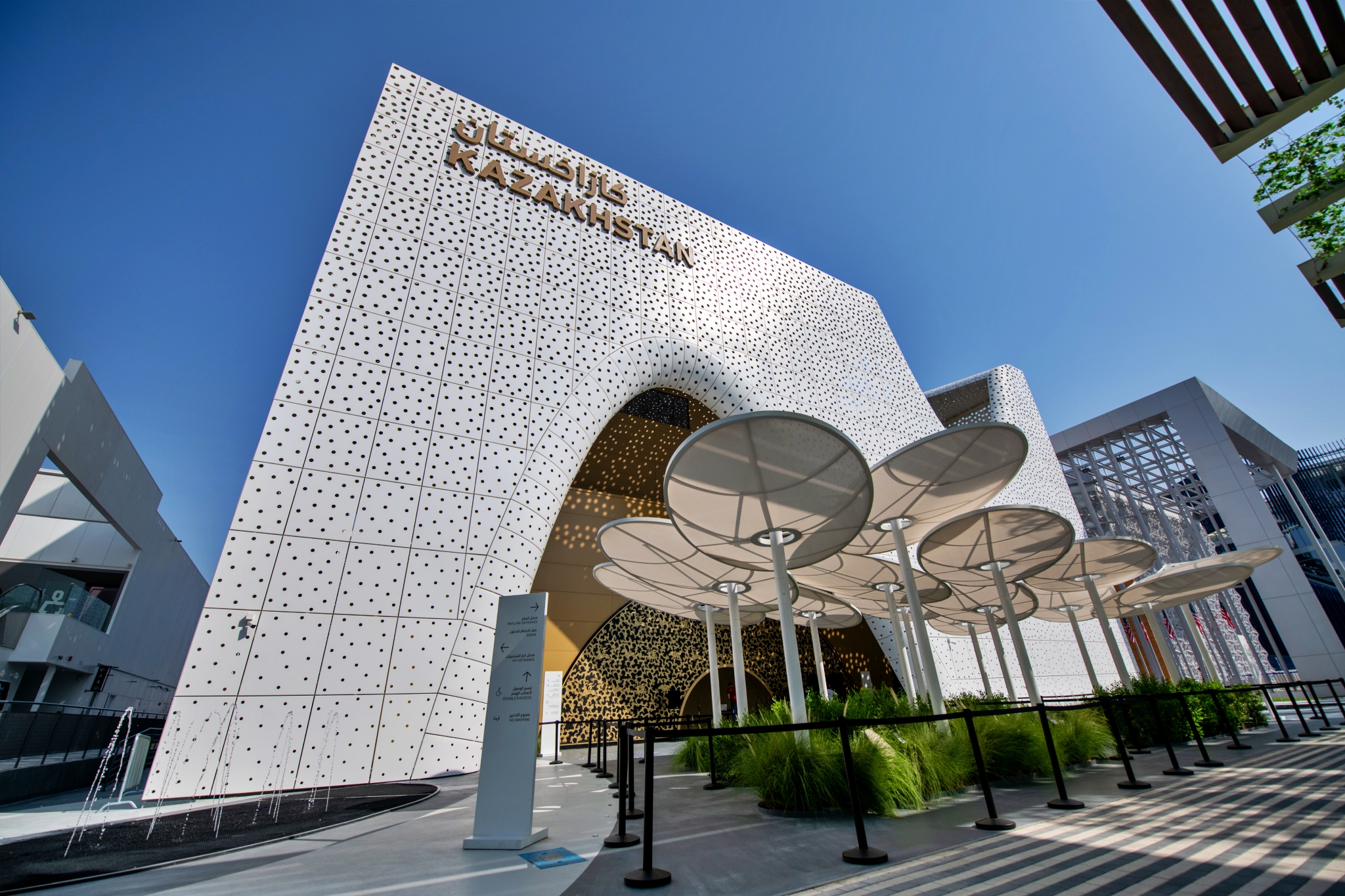 The doors to EXPO 2020 are open in Dubai, UAE. Kazakhstan is participating, too. Info Shymkent had a look on Kazakhstan’s history of EXPO pavilion.

The history of the World exposition is long. The first World fair opened it’s gates in London, Great Britain in 1851. These great events were and still are a good opportunity for countries to present their recent inventions, innovations and their culture heritage. And each world exposition – short EXPO – has its own centerpiece around the national pavilions.

Many of them were so impressive that they were not destroyed at the end of the world fair and became an iconic landmark for the host city. Some examples are the Eifel tower in Paris (France), the Space Needle in Seattle (USA), the Atomium in Brussels (Belgium) or recently the Nur-Alem sphere in Nur-Sultan in Kazakhstan.

But how looked like the pavilions of the Republic of Kazakhstan over the time?

Info Shymkent will take you through the history. Let’s go!

Kazakhstan’s first participation started in 2005 in Japan. The EXPO 2005 in Aichi was under the theme Nature’s Wisdom and Kazakhstan was a participant of the Central Asia pavilion. The country displayed a replica of the Golden man in their exhibition area – a buried 18-year-old Scythian-Saka with 4,000 gold ornaments and golden warrior equipment. Also the country’s beautiful and magnificent nature was introduced to the public. On the Kazakhstan Day during the Expo the country performed traditional dances with Kazakh traditional music under the name Melody of the Great Silk Road.

The first participation on the EXPO was a great success for Central Asia’s biggest country, so Kazakhstan decided to take part with their own pavilion at EXPO 2008 in Zaragoza in Spain. The city is located at the delta of Spain’s biggest river Ebro before it flows into the Mediterranean Sea. So the city chosen the Motto Water and Sustainable Development for the EXPO 2008.

The Spanish Santiago Carroquino Architects and German Hans Finner designed the first pavilion of Kazakhstan. The exhibition on around 500m² was divided into four stops on a walkway through the pavilion. The first part was showing the strong Kazakh winter, the high Tian Shan mountains, and the important role of snow for the country’s water system.

The next stop was a Kazakh yurt where the visitors could learn more about the customs of the Central Asian country. In the next room the visitors could experience the hot Kazakh summer and the importance of the big Syr-Darya and Irtysh rivers, and the country’s irrigation systems. The visit ended in a small “smart” forest with an audio-visual presentation of Kazakhstan’s cities and tourist attractions clipped on the tree trunks.

The theme for the next EXPO was Better life – Better city. It was a good choice for the host Shanghai. Sanghai is one of the largest city of China.

Kazakhstan doubled the size of it’s pavilion in 2010 to a size of around 1000 m². The highlight of this exhibition was a chilled room with pine trees, a snowman and a bridge covered with artificial snow to give visitors an idea what it feels like to live in the second-coldest capital: Kazakhstan’s capital Astana (now Nur-Sultan). The centerpiece of the pavilion was a twelve meter high copy of Astana’s famous Bayterek Tower. A small stage and a 4D cinema provided a panoramic view of Kazakhstan to introduce its long history, diversity, customs and landscapes to the public.

Kazakhstan’s fourth participation in the EXPO exhibition was in Yeosu-si, a South Korean city close to the sea. The motto was linked with The Living Ocean and Coast to Earth’s important element water again. The Republic of Kazakhstan, one of the 108 participating countries, built this time a 774m² pavilion. Arranged around the central theme of water, the pavilion presented Kazakh traditions as well Kazakhstan’s innovations in science, business and tourism in six different section of the building.

An important role played this time the Kazakh pavilion to present and promote Astana’s bid to host the EXPO in 2017 with the motto Future Energy. The effort was successful and during the EXPO Kazakhstan was revealed as the winning host for EXPO 2017.

The next EXPO was held back in Europe during the summer 2015. The host city Milan selected Feed the Planet – Energy for Life as their motto, and an important theme to talk about for the future of mankind.

This theme was also a good opportunity for Kazakhstan to present their modern agriculture concepts. The architects for Kazakhstan’s pavilion was for the second time a team from Germany – this time gtp2 architekten. They designed a modern pavilion with an exhibition size over two floors of more than 2.000 m². The facade of the building is inspired by eagle feathers and the ears of wheat. Inside, the visitors could find highlights like the original desk of agriculture scientist Alexander Barayev who developed the strategy to turn the Kazakh steppe into grain fields, a milk bar to taste the national drink Kumys (fermented horse milk), a 4D cinema to take a virtual flight as a sun beam to the future Expo 2017 site in Astana, a restaurant to try more examples of the rich Kazakh cuisine and a small souvenir shop.

Out of 145 participating countries Kazakhstan received for it’s great presentation the third place at the end of the exhibition – a good sign for the next EXPO at home.

The sixth participation at the EXPO was a special one for Kazakhstan. The country won – as we mentioned before – the bid to be the host for this years world fair in 2012. 112 countries were invited to present with Central Asia’s biggest country the solutions for Future Energy – the motto of the EXPO 2017.

The centerpiece of the exhibition and Kazakhstan’s pavilion was the Nur Alem building. Nur Alem is the world’s largest and first complete sphere building, and it was designed by Adrian Smith and Gordan Gill Architecture – the same architects who designed Burj Khalifa – the tallest building on the planet. A solar photovoltaic system on the skin of the sphere and two wind turbines on the roof underlined Kazakhstan’s solution to find future energy. On eight levels the Republic of Kazakhstan presented the culture heritage of the country, a trip through the solar system, the past and future development in spaceflight, solar energy cars and planes and a viewing platform on the top to provide great views over the young capital of Kazakhstan.

The next stop of the EXPO is Dubai. The largest city in the United Arab Emirates (UAE), a cultural melting pot and a hub between Middle East, Asia and Europe selected the theme Connecting Minds, Creating the Future for their world exhibition. It was originally planned that the exhibition will open its doors in 2020, but the World Expo opened its doors after a year-long delay this October caused by the global crisis of the Covid-19 pandemic.

Also this time the Republic of Kazakhstan is taking part with its own national pavilion. The pavilion with the name The Gateway to tomorrow has exhibition area of 3,400 m² on three floors, and it’s located in the Opportunities cluster with other important countries such as: UAE, USA, Switzerland, China and Italy. The architects of the Kazakh pavilion was this time the Swiss company Nüssli AG.

The exterior of the pavilion was inspired by the traditional Ayir Kalpak headdress and the old oriental architecture of Kazakhstan’s silk road cities. This is a perfect synthesis of modern digital solutions and traditions, and the huge round gate symbolizes the hospitality of Central Asia’s largest country. The pavilion takes the EXPO visitors on a tour through four huge exhibition areas and already connects them with petroglyphs and geoglyphs elements of the Scythian-Saka culture with the long history of Kazakhstan.

The Pre-show is built around the DNA Code – Shezhire theme, which tells about the genetic relationship of different ethnic groups and the contribution of nomadic peoples of the Great Steppe to the genetics of the world heritage in different historical periods. The next exhibition area is The Great Steppe, and represents an acquaintance with Kazakhstan, its unique natural landscapes and resources, rich history, culture and traditions, and consists of 4 blocks: Sacred Map, Wealth of the Land, Wealth of Biodiversity, Cultural heritage. The visitors can virtually wear traditional Kazakh clothes or can have a look – like in 2005 – on a replica of the famous Golden Man.

The next area is The City of Nur-Sultan – the Heart of Eurasia and it presents the capital of Kazakhstan in the form of a large-scale 360° panorama with a width of 15 meters and a height of 12 meters. The panorama brings the iconic modern architecture of Kazakhstan’s capital Nur-Sultan closer to the visitors and invite them to visit Nur-Sultan and Kazakhstan itself. Future now is next main exposition area of the pavilion and it is demonstrating the investment potential of Kazakhstan and the opportunities that the country offers to attract foreign investment.

The last exhibition area is Unlimited Space and it is an unique show of the relationship between human and artificial intelligence (AI), an important theme for the entire world. At the end of exhibition the restaurant Qazaq Gourmet invites visitors to try Kazakh cuisine or to buy a souvenir in the gift shop.

This is already the end of our journey through the history of Kazakhstan’s EXPO pavilion. We hope you learned a lot about Kazakhstan, the World Fair and the EXPO themes of the last two decades.

Have a great day and we hope to see you in Dubai in the Kazakhstan’s pavilion this winter.

Read more about EXPO and Kazakhstan: