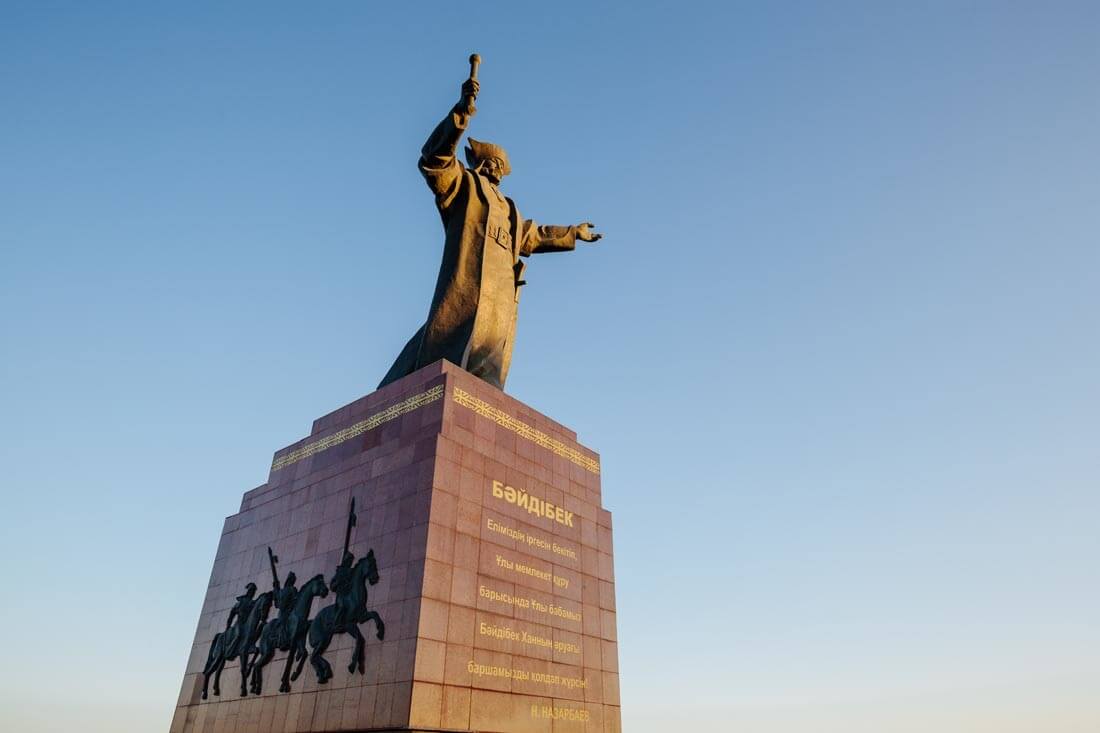 Info Shymkent made a autumn short trip through yellow colored Karatau Mountains to walk on foot steps of the family of Kazakh wise man Baidibek Bi.

On a warm September morning we started our trip with a local tourist group by van from Ordabasy Square in Shymkent. We drove north passing by Shymkent Zoo and the huge Baidibek Bi Monument (байдибек би монумент). The monument with it’s 23 meters one of the largest monuments in South Kazakhstan and Baidibek Bi looks with his open arms a little bit like the Christ the Redeemer statue in Rio de Janeiro in Brazil. But who is this man? Who is Baidibek Bi? His full name was Baidibek Karashauly and we would like to learn more about him – so our trip destination is directly connected with this wise men.

After one hour drive and around 70 kilometers on the street to the north we passing by the grave of Baidibek’s third wife. It’s the mystic and wise women Domalak Ana also known as Nurila. We already wrote a article about her. After the village Akmechet we leaving the main road to the right to the one of the largest caves in Central Asia – the Akmechet cave. We passing by also this place and driving additional thirty minutes through the yellow autumn steppe to arrive the village Baidibek Ata in the Baidibek district.

The name of the village and the district already tells us that we arrived on the right place to learn more about this famous Kazakh. Baidibek Bi was buried on this place in 1419 with a age of 63. Our guide tells us that he was born in 1356 in Tashkent and became a respected warlord and wise man of the Kazakh tribes. He became famous for his actions to make peace between the nomadic Kazakh tribes and started a reunion of these tribes.

As we arriving the necropolis of the village Baidibek Ata we can already see the mausoleum inside on the top of a hill. The original mausoleum don’t exist anymore. The current one is 12th reconstruction of the mausoleum and was built in a very modern design by architect Sadyrbaev in 1999 over the old mausoleum of the 19th century.

We climbing up the steep steps to the mausoleum and passing the two golden snow leopards at the entrance and walking inside of Baidibek’s Mausoleum. We recognize that the old mausoleum still exists. The new mausoleum only covering the old building. The still beautiful dome exists.

Sary – also known as Marau Ana – the first wife of the famous warlord is also buried next to the mausoleum, as well one of their sons.

After we made a short lunch break at the entrance to Baidibek’s Mausoleum we want to continue our research of the famous Kazakh Bi.

We just drive another 15 minutes and around three kilometers through the village Baidibek Ata along small river Bala Bugun and coming to another historic landmark – the Kos Ana Complex and Mausoleum.

It is the Mausoleum of Zerip Cylandy, better known as Kos Ana. She was the second wife of Baidibek.

We crossing the white colored gate of the complex and inside of the walls are ruins of a mosque from the 12th or 13th century. Because of the expensive high quality bricks of the ruins historians are not sure yet whether it was not just a mosque but also a small fort or monastery (Ribat) of Sufi dervishes (Khanak).

After we passed by the remains of the old mosque we arriving the Mausoleum of Kos Ana. The mausoleum is – like Baidibek Bi Mausoleum – a modern white building. Inside people can see eighteen stelae with names of each of Baidibek Bi’s children. Inside of the mausoleum was not only Baidibek’s wife buried. According to the legend also a daughter and his son-in-law Zerip Slanda found there last resting place on this place.

We leaving the Kos Ana Complex through a gate in the west wall and walking another 50 meters to a small spring. A old kind woman – the guardian of the Mausoleum – waits for us. The guide tells us that the water is known for its purifying properties. Some of us get a nice shower with the fresh cold water from the spring by her. What a nice fun during this hot September day!

During we leaving the Kos Ana Complex we have a last look into the nature of the Karatau Mountains. The nice yellow colors of the autumn in the valley of small river Bala Bugun are beautiful.

But it’s time to go back to Shymkent. But we learned very much about Baidibek Karashauly – about one of the famous Kazakh Bi’s – on this day. The trip 150 kilometers into the Karatau Mountains was incredible.