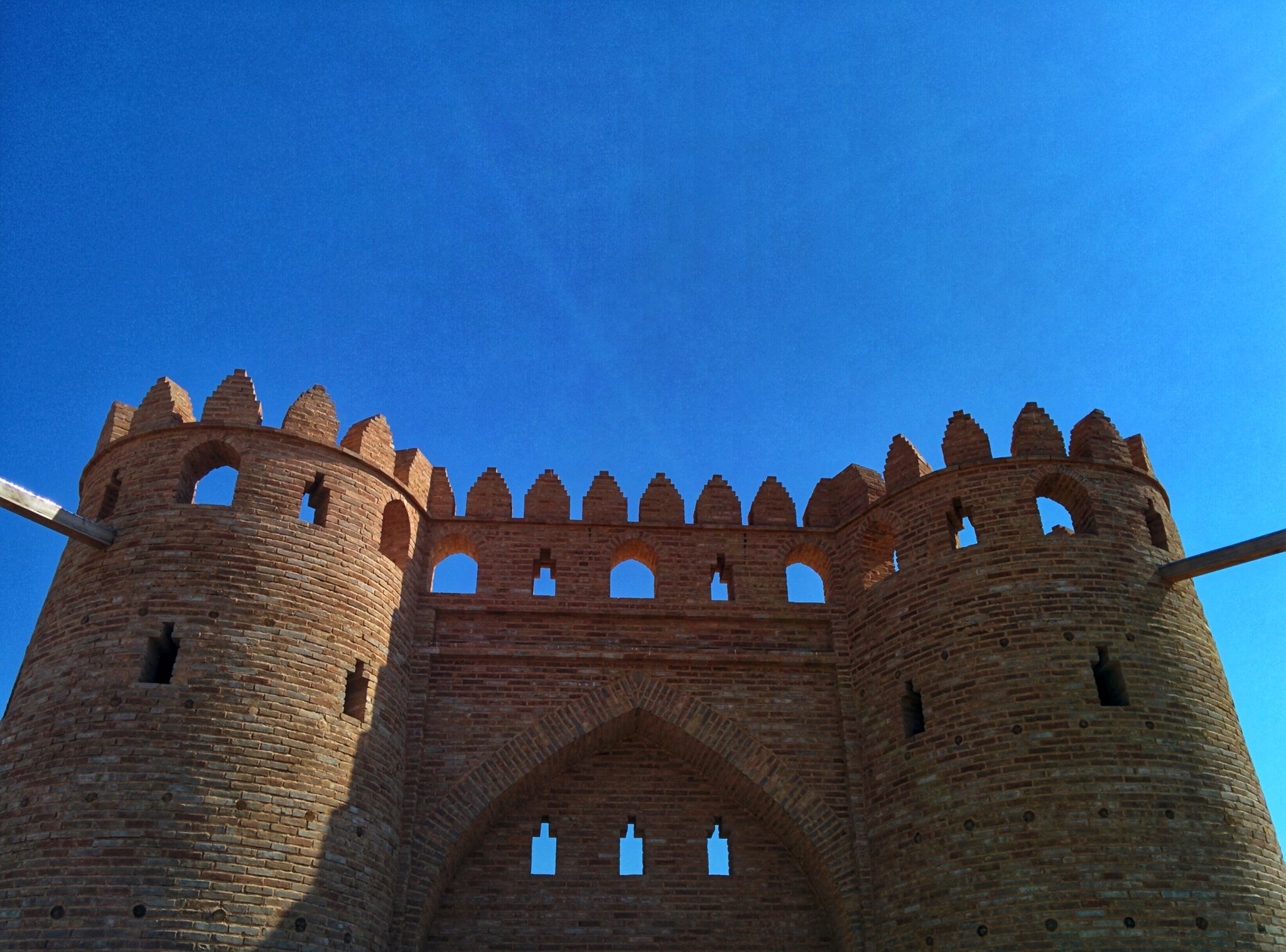 Ancient city Otrar was one of the biggest & famous city on Silk Way. The battle between Otrar and the Mongol King Genghis Khan became legend. Recently we visited this mystical city.

On a warm autumn day with blue sky we wanted to do another short trip to learn more about Kazakhstan’s history. We wanted to visit the ancient city Otrar. This city is about 1300 years old and is mentioned in the history books as Turband, Turar, Tarband, Traban – but is best known as Farab. It has a very long turbulant history. The ancient city Otrar is located in Otrar district in the Turkestan region of Kazakhstan. So we made a trip of around 150 km and two hours drive by car from Shymkent to Otrartobe – it’s the name for the ancient city Otrar. The new settlement what called Otrar is some kilometers away. The old settlement is close to the Mausoleum of Arystan Bab. We paid a small entrance fee and went into city walls of the old settlement.

In the 6-8th centuries, Otrar was the political center of the middle reaches of the Syr Darya river. In the 9th-12th centuries, it became one of the main cities in the region. Otrar was one of the centers of developed culture and economy during the times of the Kazakh Khanate. The prosperity of Otrar and the fact that it became the largest city center in the Middle Ages was largely influenced by its location. It was located close to the mouth of the Arys river into the huge Syr Darya and a good stop for caravans. So the Great Silk Road created favorable conditions for the rapid growth of the city. Otrar became a center of trade with nomadic tribes along the Aral Sea. It was an important trade route from Iran and Central Asia to Siberia, Mongolia and China. There were mosques, madrassas, markets, workshops and even hotels, hot baths and shops. They even developed a dirt water canalization system and to move hot water to the hot baths around the town.

Farab was also with its connection between East and West a good place to collect books and manuscripts in a huge library. The library became the second biggest library in this time.

But Otrar was a famous city not because of the good trading or the second biggest library. Otrar went popular as a place for knowledge and education. It was the birthplace of many famous scientists, philosophers, poets and authors. Some of them were: Abu Nasr Al-Farabi , Al-Abbas ibn Said al-Jawhari, Ismail ibn Hammad al-Jawhari and many others.

The most famous person who was born in 872 in Otar is Abu Nasir Muhammad ibn Muhammad Tarhan ibn Uzlag al-Farabi at-Turki well known as Abu Nasr Al-Farabi. He was a islamic philosopher, poet, scientist, geographer, linguist and mathematician and music theorist. He went popular as the “The second teacher in the world” or “Aristotle of the East“.

Al-Abbas ibn Said al-Jawhari who was born 70 years before Al-Farabi went popular about his mathematical theory work about his Commentary on Euclid’s Elements. But he was not only a mathematician. He was also a well known astronomer and astrologer as well. He worked in Bagdad (Iraq) at the Islamic academy “Wisdom House” (in Arab language: Bayt al-Hikmah) and Damascus (Syria).

Another popular person from Otrar is Ismail ibn Hammad al-Jawhari. He was a lexicographer, calligrapher and linguist. He wrote explanatory dictionary of the Arabic language “Al-Sihah“. The full name of his work “Al-Sihah“/”Al-Sihah fi al-Lughah“: Taj al-Lugha wa Sihah al-Arabiya in English it means The Crown of Language and the correct of Arabic.

But the prosperity and wealth of Otrar found a fast end with the biggest disaster of the city started in the year 1219: A huge trade caravan of around 450-500 men of Genghis Khan arrived in the city of Otrar and they told that they want to start trade relations between Mongols and the Khwarazmian Empire. In the history textbooks written that the governor of Otrar Inalchuq (in Kazakh: Kairkhan) was afraid of the Mongolian caravan. He accused them being Mongolian spies.

But was the trade caravan of Genghis Khan really dangerous, actually? As I guess it could be: The Mongol king sent in the past before his military campaigns in China spies and he also sent spies to Europe before he started his fast attacks on this continent. So the purpose of these 500 men strong caravan was to inspect the biggest and popular city. They wanted to check how is the life of people in this city. How strong are the fortifications and are there any hidden gates? And of course how strong the army of this city?

So Inalchuq, the Governor of Otrar, accused the merchants of Genghis Khan to be spies and killed with the assent of Sultan Muhammad II. of Khwarizmi all of them and sold all their goods. Genghis Khan tried to make another peaceful diplomatic attempt and sent two Mongol and one Muslim diplomat. But Governor Inalchuq cut the heads and shaved the beards of the Mongol diplomats and sent the heads back to the Mongol king. This became the reason for the invasion of Genghis Khan into Central Asia.

In 1219, Genghis Khan sent his sons Chagatai and Ögedei with about 200 thousand troops to take the city of Otrar. Genghis Khan, not expecting strong resistance, got angry and ordered the full destruction of the city fortress.

Otrar fought six months and six days. The city was running out of food. Unable to withstand hunger and thinking that the war would end in defeat, a traitor named Karazha who led part of the Otrar army of 10,000 men under his command, went to the side of the Mongols. He opened the gates of the city to the enemy. Due to his betrayal, the city was taken by the Mongols in 1220. According to legend, the Mongols poured lead into the Inalchuq’s throat and killed him. The city was plundered and destroyed during several days.

But what happend to the second biggest library in the world? After Genghis Khan conquered the city, the buildings of the famous library was destroyed. Nobody still knows where was the library located and what happened to the books after the Mongols King set the city on fire. Some sources telling that he ordered to burn the library with the books – but others telling that he made a barn out of the library – and some books could survive.

After the conquest of Genghis Khan the city was rebuilt and became an important political and economic center again – but the city didn’t got the glory, wealth and prosperity back that Otrar has achieved before the battle against the Mongols. The city got another entry into the history books because it became the place where the famous Turk King Tamerlane – also known as Amir Timur – died during his fight against the Chinese Ming dynasty in 17 February 1405.

During the next centuries the importance of the the mouth of the river Arys went away from the borders of Otrar and also the irrigation systems for the fields around the cities became dry. Also the importance of the Great Silk Road faded away. More and more families left the city. Today the city is abounded and a ghost town.

During our visit we could visit the old reconstructed city gate, the foundations of the old mosque and old houses and we walked along the old still good visible city walls of Otrar. Outside of the city walls we could also inspect the foundations of hot baths which offered room for undressing, bath, massages and praying in the past.

The ancient city Otrar was worth to visit and we learned very much about our Kazakh history this day.