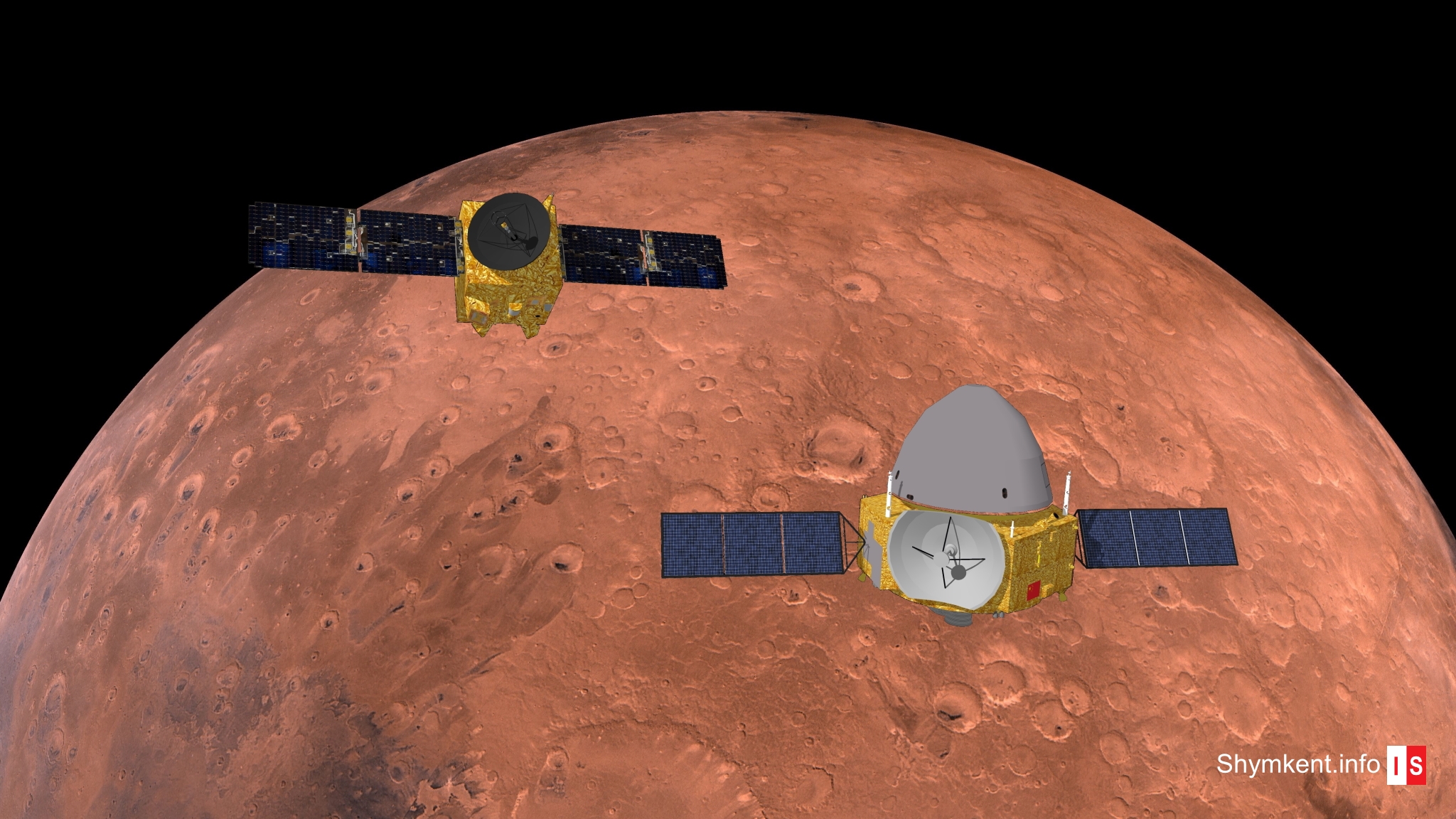 Spacecrafts from three nations will arrive at Planet Mars shortly. Two of them are for the first time at the Red Planet. Info Shymkent will have a look on them.

The first spacecraft which will arrive at Mars will be an orbiter built by the United Arab Emirates. The Emirates Mars Mission (EMM) which was launched on the Japanese rocket H-IIA at 19th July last year is called Al-Amal, that means Hope in Arabic language. The Orbiter was entered the Mars orbit at 3:57pm UTC / 9:57 Almaty time on 9th February 2021 successful. The scientific goal of this mission is to solve more scientific secrets of the atmosphere of the Red planet. The EEM will use three scientific instruments to achieve this goal. The Emirates Mars Infrared Spectrometer (EMIRS) will work in Infrared and will have a look on Dust storms and Water vapour in the planets atmosphere. The second instrument called Emirates Exploration Imager (EXI) will take high-res photos to analyze ozone in the upper atmosphere and ice and CO2 clouds in the lower atmosphere. The last big scientific payload on the first Arab Mars Mission Hope is the Emirates Mars Ultraviolet Spectrometer. It works with ultra violet light and looks for the chemical components in the upper atmosphere of the Red planet. The orbiter Al-Amal with a weight of 1350 kg will operate around Mars on a 20,000×53,000 km orbit for around two Martian years.

Time Schedule for the Arrival on Mars on 9th February 2021:

The second spacecraft which will arrive at Mars will be China’s first mission to the Red Planet. The spacecraft which was launched on the China’s strongest rocket Long March 5 at 23th July last year is called Tianwen-1, that means Heavenly questions-1 in Chinese language. If everything goes well the orbiter will enter the Mars orbit at 12:01pm UTC / 06:01pm Almaty time on 10th February 2021. The Tianwen-1 mission is not only a Orbiter – it’s also a lander and a Mars rover. So this mission is very ambitious for a first try at the Red Planet. Even the scientific payload is very advanced. The Orbiter has a Mars Magnetometer (MM) to analyze Mars magnetic field, a Subsurface Detection Radar (OSR) to analyze the structure under the Mars ground, a Mars Mineralogy Spectrometer (MMS) to have a look on the geological elements on Red Planets surface. Last but not least the Orbiter is home of two cameras, High-Res Camera (HRC) and Medium Resolution Camera (MRC), to make photos of Mars during its operation time around Mars. The orbiter of Tianwen-1 with a weight of 3,175 kg – if also everything goes right – will operate around Mars for two earth years. The lander will land in May 2021 on the Mars surface in the Utopia Planitia region. After a soft landing the Mars rover with a weight of 240 kg will leave the lander and will explore the Martian rocks. This will make China to the second nation that will operate a rover on Mars – just after the United States.

The two spacecrafts will not be the only Newbies on Mars in the next coming days: On the 18th February 2021 will land the SUV sized US-Rover Perseverance on Mars. The American Space Agency NASA is operating already a rover with the same size on Mars – the Rover Curiosity since August 2012.

The Red planet is a tricky planet – very much spacecrafts were lost at Mars. So we hope everything goes well and we see this three spacecrafts performing well on our cosmic neighbor.

More articles about Spaceflight and the spacecrafts: