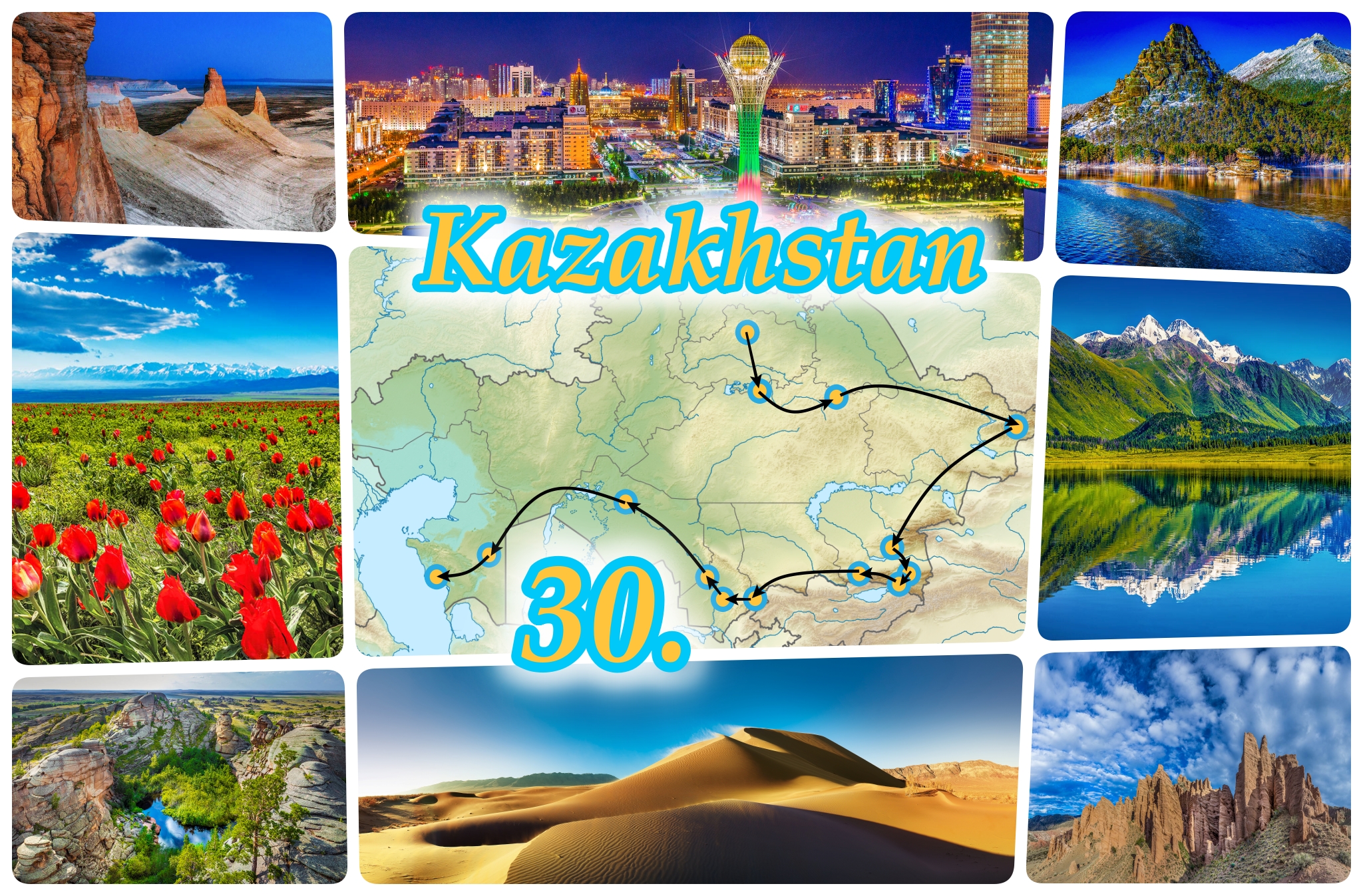 Kazakhstan is not just Baikonur & Semipalatinsk. The country has more to offer. We take you on tour to the tourist jewels of this young nation.

Today Kazakhstan is celebrating the 30th Anniversary of it’s Independence. On the 16th of December 1991, the Kazakh Soviet Socialist Republic left the Soviet Union and got as the Republic of Kazakhstan its Independence. The young nation became with a land mass of 2,724,900 square kilometers – the ninth largest country in the world. During the 30 years Kazakhstan changed a lot and hosted international events such as: the 7th Asian Winter Games in 2011 and the EXPO – Future’s energy in 2017.

But people around the world still associate Kazakhstan with the Baikonur Cosmodrome, the horrific nuclear disaster at The Polygon test site in Semipalatinsk, and the disappearance of the Aral Sea.

But within the borders of Kazakhstan there is so much BEAUTY! In this beautiful country it is possible to see high snow-capped mountains, for example, Khan Tengri, which is considered the highest peak in Kazakhstan with a height of 7010 meters, and also low places like the salty and dry Karagiye depression near the Caspian Sea that is 132 meters below sea level.

And in Kazakhstan there is not only grassland-steppe, but also cyan lakes and green forests, sand dunes and deep gorges. The country’s historical heritage is huge: Bronze Age petroglyphs in Aksu-Zhabagly, colorful Islamic architecture from the Timurid Empire in Turkestan, Soviet architecture in Almaty or ultra-modern architecture in the newly built capital Nur-Sultan.

On today’s Independence Day holiday, we would like to take our readers on a tour of beautiful Kazakhstan to show the touristic wonders of this young and amazing country through the photographs of the famous Kazakh photographer Farhat Kabdykairov. Let’s go!

Our journey begins in Burabay National Park, which is around 200 kilometers north of the capital of Kazakhstan. Burabay is a green oasis in the Kokshetau Steppe famous for its picturesque tent-shaped stone mountains, dark blue lakes and surrounded by dense pine forests. Burabay, covering 83,511 hectares, was declared a national park in 2000. One of the most famous species that you will find in the national park is the partridge and the capercaillie.

After leaving Burabay National Park, we drive 200 kilometers south to Kazakhstan’s new capital, Nur-Sultan. The city – formerly known as Akmola and Astana – has been the capital of Kazakhstan since 1998. The extravagant and modern architectural style of many government buildings, cultural and sports facilities, museums and skyscrapers in the new capital, which were created on the drawing board, attracts many architecture enthusiasts.

Our next destination on our tour through Kazakhstan is the Bayanaul National Park, around 400 kilometers to the east of Nur-Sultan. Bayanaul is Kazakhstan’s first national park and was established in 1985. The national park is also a green oasis in the steppe and offers three huge lakes for swimming and the bizarre round granite rocks in the midst of pine forests invite you to hike or climb.

The next stage of our tour of Kazakhstan is the easternmost point of the Republic of Kazakhstan. In this corner of the Central Asian country is the Katon-Karagay National Park. Visitors describe this region as the Kazakh version of the Canadian Rocky Mountains. The Katon-Karagay National Park in the Altai has endless forests, crystal-clear lakes and snow-capped mountains with Belukha (4,506 m) as the highest peak.

We now drive south along the Chinese border and arrive at Altyn-Emel National Park, the largest national park in Kazakhstan. The singing dunes are the biggest attraction. It feels like you’ve arrived in the Sahara, but from above you can see the colorful red and white striped hills of the Aktau Mountains and, if you’re lucky, a herd of Kulans grazing on the banks of the Ili River.

After crossing the Ili River to the south, we arrive at the 50-kilometer-long Sharyn Canyon, often referred to as the little brother of the Grand Canyon in the USA, with its thinly layered red sedimentary rock. Take the time to walk down the Valley of Castles, looking up left and right. Some rocks look like Imperial Star Destroyer from Star Wars, others like castles, faces or objects.

A forest in a lake: Kolsai Lakes National Park

We now leave Sharyn Canyon west to drive up the Shylek River valley to reach Kolsai Lakes National Park. This youngest national park of the Republic of Kazakhstan was established in 2007 and named after the three beautiful Kolsai Lakes on the northern slopes of the Tian Shan Mountains. This national park is home to Kaindy Lake – another popular lake. It became popular because of its very cyan water and having mature trees in it. The trees are remnants of a forest that was submerged after a massive landslide during an earthquake in 1911.

The next stop after our visit to the Tian Shan Mountains is the largest city in the Republic of Kazakhstan: Almaty. The former capital is a modern and vibrant city with skyscrapers, museums and parks. On sunny, clear days, the view of the snow-capped Trans-Ili-Alatau mountains is incredible. If you have time, you can also visit the highest ice skating rink in the world in Medeu. If you are full of energy you can also start your hiking tour to the Shymbulak ski area from there.

The oldest one: Aksu-Zhabagly National Reserve

We leave the city of Almaty and driving westward. After about 650 kilometers, just before we reach the city of Shymkent, we will visit the oldest national reserve of the Soviet Union – Aksu-Zhabagly National Reserve. The national reserve was established in 1926 to protect the beautiful western Tian Shan Mountains and parts of the breathtakingly deep Aksu Canyon. This area is home to the snow leopard, Himalayan brown bear, Siberian ibex and Menzbier marmot. It is also home to the wild tulip flowers such as Tulipa kaufmanniana, Tulipa Greigii and many others.

The spirit of the Kazakhstan: city Shymkent

After leaving the Aksu-Zhabagly National Reserve, we take a break in Kazakhstan’s third largest city: Shymkent. The 2200 year old city is famous for the delicious Kazakh cuisine. the newly reconstructed ancient citadel, the Baidibek Bi monument (Kazakhstan’s largest statue) and the vibrant colorful Arbat pedestrian street. A trip to the even older suburb of Sayram with its tiny but beautiful old mausoleum is recommended.

On the old Silk Road: city Turkestan and the Silk Road ghost towns

The next stage of our round trip through Kazakhstan is just 130 kilometers long. We arrive in the city of Turkistan. Its main attraction is the mausoleum of Khoja Ahmed Yasawi, built by order of the famous King Amir Timur. The unfinished mausoleum is the prototype of Timurid architecture and its style was adopted during the Timurid Empire, and it is possible to see buildings with these unique cyan blue ceramic domes and colorful ceramic patterns across Uzbekistan, Iran and Afghanistan. The Khoja Ahmed Yasawi Mausoleum was added to the UNESCO World Heritage List in 2003. In the vicinity of the city of Turkestan you can find several old ghost towns of the ancient Silk Road cities – such as Otrartobe (destroyed by Genghis Khan in 1219) and Sauran (former capital of the Blue Horde).

The door to space: Cosmodrome Baikonur

We drive 530 kilometers northwest and follow the Syr Darya River to reach our next destination: the Baikonur Cosmodrome. The first satellite, the first animal, the first human and the first woman were launched into space from here. Russia leases this area from Kazakhstan and is still launching rockets into space. As of 2020, it was the only human access to space. Watching a rocket with cosmonauts on board rise from the Kazakh steppe into the sky is a lifetime experience.

After a long drive on the road we reach the extreme west of Kazakhstan. Here is the Ustyurt National Reserve, which has a size of 223,000 hectares. The national reserve protects the unique Ustyurt plateau with very impressive mesas and rock formations as well as the endangered Ustyurt mountain sheep and the Saiga antelope. One of the most popular sights are Bozzhira Tract, Sherkala Mountain (in the shape of a yurt) and Valley of Spheres (very perfect round rocks).

From the desert to the Sea: Caspian Sea

From the desert to the sea: This is our last leg of our journey through the Republic of Kazakhstan. We drive west from the Ustyurt Plateau until we reach the Caspian Sea near Aktau. The Caspian Sea is the world’s largest inland body of water. You can find sandy and rocky beaches on its shore and it is home to some beautiful animals like the Caspian seal and the greater flamingo. It is a beautiful place to watch the sunset and to finish our tour through Kazakhstan.

We hope you enjoyed our photo tour through Kazakhstan and learned that the ninth largest country on earth is not just a composition of steppe, Baikonur and Semipalatinsk. The country offers very unique and diverse landscapes and cities, and over 130 ethnic groups celebrating their culture. It is time to say this to the world and we hope that you will spread these words and visit these beautiful places in Central Asia in the near future.

Read more about Shymkent and Kazakhstan: